I had breakfast with one of my mommy friends last week.  We didn’t get to see each other over the holidays, so I decided to visit her one January morning to catch up on things.

We’ve been friends since our children were in Sr. Prep (they are now in Grade 5).  Her child is a girl, while mine is a boy.  The gender was never an issue, though.  They hang out with other boys and girls whose moms are friends of ours, too. We have had a number of Christmas breakfasts with the kids, as well as Halloween parties and lazy summer afternoon get-togethers.

When I apologized for missing the last Christmas breakfast, she had this to say… “You wouldn’t believe it.  The kids DON’T talk to each other anymore!!! The boys were at one corner of the room playing PSP, while the girls were at the other side, talking in hushed voices.  It’s like they don’t know each other!  When I asked them if they wanted to swim, they all gave me this stare like I said something silly, and then all looked away at the same time.”

“They have changed. All of them.  I wonder if they really ignore each other in school,” she sighed, “I don’t know what happened to those kids!”

I think I know what happened.  They grew up.  They all grew up – right under our noses – and they started choosing their own friends.  They found the friends they want to be with in school.  Unfortunately, mommy’s friends’ children aren’t always the people they prefer hanging out with (or being seen with, at the very worst).

Friendship isn’t something that you can force on someone.

I asked my son if he’s still friends with my friend’s daughter and if they talk to each other in school.  He answered yes to both questions.  Then I told him about the Christmas get-together and how the other kids didn’t mind each other.  He just gave me a knowing smile.

I told He-Man about the incident.  This was his explanation, “They are at that age where they are starting to choose their group of friends… or who they want to be associated with.  You know the groups… athletes, nerds, mean girls, misfits.”  And he continues, “Come on, you should know.  You were a mean girl in high school. Did you talk to the misfits?”

I was stunned.  He-Man called me a mean girl.  But then again, I couldn’t deny it.  I WAS a mean girl in a high school.  Shamefully so. 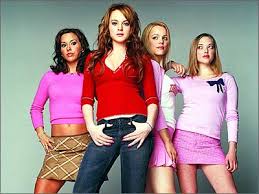 How can a shy girl* end up being a mean girl, you may ask?

Oh, I was a nice, mean girl.  I wasn’t really nasty.  I never did anything bad to a schoolmate just for the heck of it.  But then back in high school, although I was pretty active and joined clubs and school organizations, I wasn’t really friendly to just anyone.  I used to regard people at arm’s length.  I chose the ones I would talk to.  I wasn’t warm and friendly.

I think I was more mean to boys than the girls.  There were boys that you wouldn’t catch me talking to.  The boys I went out with basically just came from the two groups of popular boys in our batch.  I don’t remember having a conversation with the lesser mortals.

Boy was I mean.  And immature.

My best guy friend from before told me that I seemed to have this fortress built around me.  Self-preservation, that’s what I called it.  Or maybe I was really just a self-centered and egotistical person who thought everybody else is beneath her. Perhaps it was my need to prove myself, my worth, that compelled me to act all high and mighty.

Eventually I attributed my haughtiness to my being really shy and insecure.  Unfortunately, nobody bought that reason. I am pretty sure they thought I was just a snob.

Half of the Facebook friends I have right now are people I NEVER talked to when we were young. A quarter of them I didn’t even know existed. Believe me, I chose the people I would converse with in high school. It’s surprising they still wanted to be Facebook friends with me today.

I have come a long way, really.  From being shy and insecure child to a mean girl to a nice, happy, sociable and smile-a-lot adult.

Perhaps it’s because I have come to realize that one should not judge other people by their mere appearance.  Maybe it’s also because my experiences taught me that it IS much better to be liked than feared.  It feels much better to open up your heart to people than to live inside your fortress all by yourself.

People do change.  People mature.  People mellow down.  As you age, you get to realize that everything’s not about you.  You get to value people more.  You tend to be less critical, especially since you know that you are not perfect, as well.

But then again, some people DON’T change.  There are mean girls who grow up to be mean adults. Am I glad I am no longer one of them.

At this point I know I cannot choose my child’s friends for him.  He has his own experiences that will dictate that. Yet I know I can always give a gentle reminder… Be nice to a misfit, he might grow up to be someone really important.  Okay, that was a joke.  That was not exactly mature.

Be nice to everyone just because.  Much better.